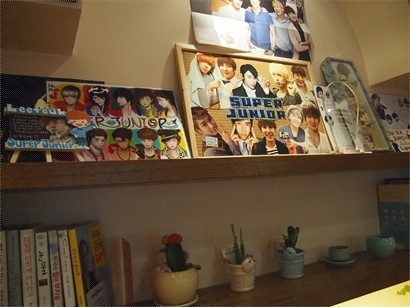 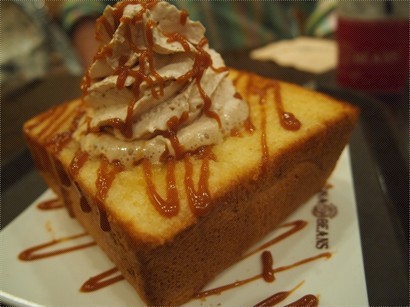 As a Korean-pop fan, Kona Beans had always been in my "to-go list".
Owned by three Super Junior's members' mothers (Leetuk's, Sungmin's and Kyuhyun's), Kona Beans had been earning a lot of fame and popularity since its opening.
Before I visited Seoul, I read countless blog reviews regarding to how brilliant Kona Beans was, in terms of atmosphere, food and servicing. And! If you were lucky enough, one of the three SJ members might came around to the shop to help out as cashier. Too bad that none of them were here during my visit, oh well.

So, Kona Beans was located at Gangnam's Apgujeong station. The shop was not easy to locate, my Korean friend and I spent a while (without google map) circling the town until we finally came to this tiny alley where we spotted the word "KONA BEANS".
The sound of coffee brewing, the familiar sound of SJ's music and some giggles and chats made by a few tables of Korean teens were all things reminding me that I was in the right place.
With a high ceiling, Kona Beans designed to be somewhat a "Hawaiian themed" coffee shop. Right from using "Hawaiian Premium Coffee beans" (apparently) to having several pine trees located around the corners of the shop, Kona Beans definitely enhanced the summery feeling to the dinning experience.
Since this is opened by the mothers of SJ, it was not surprising for us to find the portraits of Leetuk, Sungmin and Kyuhyun around. Oh, and of course lots of fan-made gifts were shown on the shelves. A constantly looping SJ performance was shown in the television too!

Moving on to the food, I actually had little expectation as I thought the shop might put more emphasis on the "idol" instead of the quality of the food themselves.
But! Very surprisingly, I was proven wrong. The food was fantastic and perhaps the best quality of food I could ever ask from a coffee shop.
I ordered an Oreo Konaccinco (Summer special) and a Honey bread to share with my friend.
The Oreo Konaccinco was the best oreo drink I ever had and I could actually taste the bites of oreo in it. It was not too icey nor fancy, just the right type of drink. And, I didn't feel thirsty at all after drinking it.
As for the honey bread, the size was just right for sharing between two. Though the cream and honey spread on top of the bread made me worry whether it would be too sweet, but after a bites it proved that the sweetness was again, just right. Something addictive about the bread that I could not stop eating until I was done.

We visited Kona Beans on a Sunday which I thought there would be a lot of people around, but it turned out to be okay.
Perhaps the popularity of Kona Beans died down slightly after its opening last year within the locals, yet I could still see a lot of foreigners coming in to the coffee shop, and we all shared something in common: that we came for Super Junior (well and the food from now on)!