On the final day before I left Seoul, we had the whole Saturday free, like finally, without any academic burden - but just to go out and explored the city. On such an important day, I decided to spend it with my Korean friend, before we separated for another god-knows-how-long years.

Back to the scenes in "Boys over flowers" If you love to watch drama as much as I do, you must know some of the most famous names in the past 10 years. One of the names that must have rang a bell would be "Meteor Garden" (Taiwanese version), aka "Hana Yori Dango" (Japanese version), aka "Boys over flowers" (Korean version). The Taiwanese version aired when I was in junior high, and it was a big hit back then. Eventually, Japan and South Korea aired their own version. Frankly, I much prefer the latter two, the Japanese one especially.
For any dramas, the places that has been visited by the filming crew for shooting scenes usually become very popular after the drama is aired. And this includes Bonjuk.
In "Boys over flowers", the leading actress worked part-time in a porridge shop, besides studying in the university, to earn money for supporting her family. Throughout the drama, the porridge shop appeared quite often, but not that it was so special that a foreigner like me would recognize the speciality of such shop. Until! My Korean friend complimented the porridge she tried in the shop, that I had been so keen to have a try while I was in Hong Kong.

Thank to this faculty summer trip, I am finally in Seoul, and my Korean friend could finally bring me to Bonjuk, the place where "Boys over flowers" was shot.
It was a Saturday morning and I was slightly worried if the place would be crowded with early birds like us. Walking out from the underground station, we spotted the shop effortlessly as a huge banner of the drama "Boys over flowers" was hanged by the name of the store, making it all so easy for anyone to notice. It was at that point that I finally felt my heart beated so quickly, I was so excited. Like really.
Inside Bonjuk, it was smaller than I imagined it to be, but very cosy and quiet. With only around 20 tables, there were cushion chairs around to keep the customers happy and comfortable, while glancing every bits of the detail in the shop. When we were seated, we couldn't wait but to examine the shop carefully, as there were pictures, signatures and words around the wall in relevant to the drama shooting. All I could say is, Bonjuk has decorated the shop really well, that anyone who watched the drama would love this place. I wished I was here during the shooting!

After all the silent-screamings and excitements, we had our eyes fixed on the menu, ready for some yummy breakfast. As funny as this might sound, but I am actually very granny-like. Those who know me well would know that I love to eat food that an old-aged woman would usually eat (well, kind of). Porridge is certainly one of the things that I love eating, anytime of the day. Therefore, the menu gave me an extremly difficult time for picking the one and only porridge. At the end, I picked the Beef seaweed porridge and my Korean friend picked the Crab meat cheese porridge.
While we were chatting about the good old times when we watched "Boys over flowers" together, the porridge arrived! Oh my gosh. The presentation topped the list immediately. Not only did they provide porridge, there were also side dishes provided, along with a cup of sweet tea as dessert. This was the most perfect porridge serving I could imagine to have.
The Beef seaweed porridge was unexpectedly delicious. The beef did not taste overly strong in the porridge, as seaweed and sesame were as strong as the beef was that everything balanced so perfectly! As for my friend's Crab meat cheese porridge, it was a refreshing combination with melted cheese and crab meat together in a porridge. Both bowls of porridge were particularly impressive because they were served immediately after cooked, the warmth and refreshness were delivered to our tummies directly.

One thing about the porridge was, it was very very big. I could still remember that, upon I finished my bowl of porridge, I burped, for a few times. Perhaps it was a better idea to share between two, or come with an empty stomach!
Bonjuk serves Korean style porridge which is something that we could hardly find in Hong Kong. I'm missing Bonjuk already! 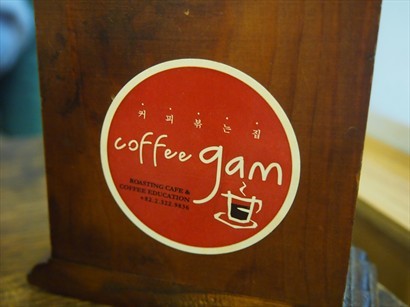 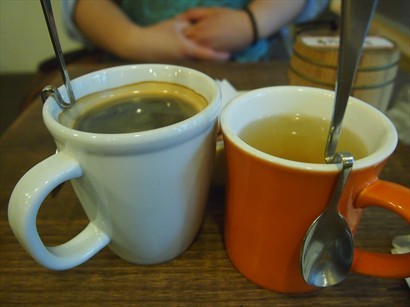 During the summer time, Seoul rains everyday. And I mean it. It rained much more than Hong Kong did that bringing an umbrella when you wre out was a must. But, instead of bringing an umbrella around, most of the Koreans tended to go for a shelter instead. And coffee shop was a popular place for shelter.
That afternoon, as my friend and I happily shopped around in Sincheon area, there it was, rainning cats and dogs. We ran into the nearest coffee shop - Coffee gam. Having no idea what this shop was, we were led by our 6th sense.

Coffee gam was quite small but very suitable for an afternoon chat, or a place for work individually in a rainy afternoon. Unlike other coffee shops, Coffee gam had a sense of western feeling. From decorations to the fashion style of the owner, it was quite American alike.
Perhaps due to the changable weather in Seoul along with my sleepless nights in working for my academic project for the past few days, my throat was not well. Thanks to my dear friend, she ordered a pomelo tea for me which was apparently famous in South Korea for its healing effect for throat. My friend was right: sweet and warm were perhaps the only words to describe the magical effects of that cup of pamelo tea.

While we were chatting, and watching the raindrops, my pamelo tea cooled down rapidly. It was a pity because I only had a few sips. Oh well, I guessed it was time for us to leave - more shopping!

[This is the final restaurant review for my stay at Seoul - thanks for reading til the last! See you in my next travelling journal!]