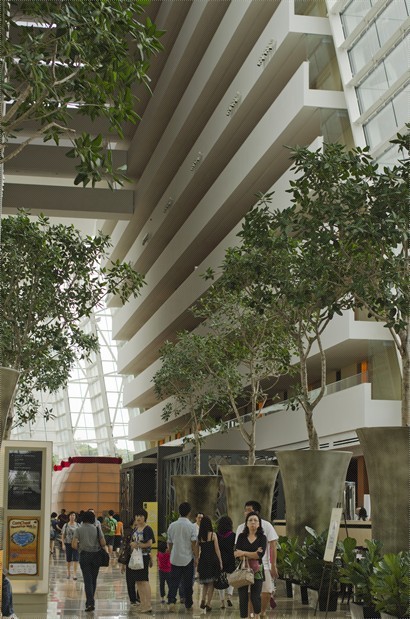 We spent little time finding the coach that would bring us to Sands, but the vehicle was more idle than moving as it had to stop at three terminals before moving onto the road. Upon arrival I was disappointed by the hotel we were checking in as it was too noisy and crowded. The hotel lobby was huge and spacious but it was also full of people walking by. Worse still, hotel check-in only started at three. So we dumped our luggage with the hotel and took a taxi to Geylang for the famous beef kway teow.

After lunch we walked along the fruit stalls and bought some before heading back to the hotel for checking-in. Worse still we were told that they didn’t have a room for us unless we waited for another extra two hours. So I wandered around in the Shoppe next to the hotel while my parents went gambling, and it was only until five something that we finally got our room. Pissed, we complained and got $100 worth of dining credits which we later got exchanged for access to the internet.

The room was fine – the toilet was out of portion and the view was great, with an outlook to the Marinas Bay, but the details could have been more cared to. But the lounge chair beside the window was an amazing spot to just sit or nap on.

The view was terrific: the pool was designed to appear as if it was infinite. What most people do at the pool is not to swim but to enjoy the view of the Bay from the pool while enjoying a sunbath at the same time. As for people who are there for a serious exercise of the body, the pool is a great spot to swim as it is long and just a single swim from the left to the right is exhausting enough! Another thing I like about the pool is that it is separated into kids’ and adults’ only session, so people who wanted to swim quietly would not be disturbed by all the screams and splashes the kids are always make. The pool on the adults’ side was also less crowded too! We basically went to swim everyday as the view was too good to be missed.

As for the gym room quite a rich variety of machines are available and one could easily spend an hour working out without realising how much calories they have burnt, which was good. And necessary for a trip to Singapore too, as you could so easily overeat as the food were all tooo delicious!

But if you ask if i would stay at the Sands if i were to travel to Singapore again, I would say: negative. The view was great, the facilities are more than fine, but the hotel was just too crowded. The hotel lobby was more crowded than a shopping mall and one felt little privacy here. Everything appeared too busy too, and this was not a place to slow down and relax.

There are better - and cheaper - hotels in Singapore. Would probably opt for those instead of The Sands - if i could convince my parents to stay at a place without a casino, that is.