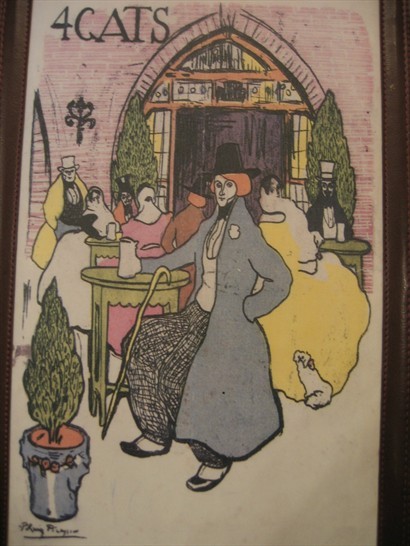 Vegetable and Parmesan
Els Quatre Gats is one restaurant mentioned in almost all tourist guide in Barcelona. It is an artsy place where in the 1900s, this place used to be where artists like Picasso hanged about.

Els Quatre Gats has their A La Carte menu pricier than places like La Fonda, Can Culleretes. If you wish to pay a visit and are looking for the best deal, the weekday lunch menu is what you need. Mind you this place is incredibly packed so make sure you reserved seats beforehand.

During the weekdays, a set lunch will cost you around 16euros per person, including three courses with wine, mineral water and bread.

Since we went there in a group of five, we were lucky enough to get to try everything on the lunch menu. For the first course, there were spinach and cheese lasagne, vegetable and Parmesan, House Paella and goat cheese Salad available.

Spinach and Cheese Lasagne was of a massive portion which I was not surprise at all. There were plentiful of creamy spinach which was awesome or my liking, but slight not cheesy enough. There was a hint of truffle aroma, but sadly the flavour was rather weak. In general a lovely vegetarian lasagne. Just don't expect much from the truffle sauce.

Vegetable and parmesan was served in a small portion. Being simply vegetable strips bake topped with parmesan, it was exceptionally tasty. The crunchiness of cooked vegetable was delighting. The veggie tasted sweet and fresh, while the rich parmesan gave some extra credits to it. Although ingredients used are simple and common, and the presentation of the dish was nothing amazing, it was flavourful and delicious.

House Paella was also surprisingly well done. Of all the paella I tried in barcelona, some of them have the rice too soft, almost congee-like. One good example would be the disastrous paella in Can Culleretes with the long grain rice. Some are too dry, and the rice is tough and somehow not thoroughly, a texture that is beyond al dente, chewy, like the ones from Tapa Tapa. Some have the flavour of seafood all soaked into the rice but nothing left in the seafood itself, like the fish paella served in La Fonda, which was tragic. House Paella in Els Quatre Gats (well in english translations they call the rice "Mountain and Sea Rice", almost like Surf and Turf rice, but as "Paella" in Spanish menu) is lucious but have slight chewiness to the rice. It absorbs the sweetness of seafood and meat, but the seafood itself inside still tasted lovely and fresh. I am guessing they might have used two lots of seafood, one for the broth to cook the rice, and one for garnish. Anyhow it is the best paella I have had in Barcelona after Cheriff. Though I mean, I pay more than triple the price to enjoy a premium paella in Cheriff. Els Quatre Gats should be proud to serve such an outstanding paella. The only thing worth critising is that there was not a lot of seafood in the paella. But I mean who cares? You eat paella for the rice that takes up all the goodness of the seafood. If you fancy to eat more seafood, order a mixed grill!

The goat cheese salad was also beautifully done. The salad leaves were fresh and crunchy. The cheese was fresh, creamy and strong, which its flavour was nicely balanced by the honeyed tomato jam. It was a light start but definitely finger licking good.
評分: 味道5   服務5   環境5   衛生4   抵食4