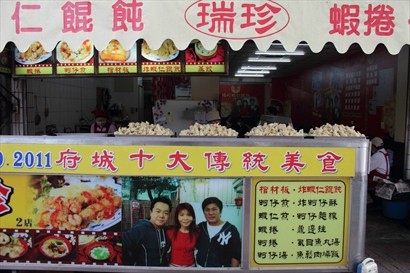 Oysters so fresh and sturdy This eatery is yet another famous site for a great variety of Tainan seafood, like milkfish, oyster, shrimps and fish balls.  I waited for 5 minutes to get a seat and I ordered an Oyster Soup and a Fish Ball Soup, it was hot as furnace when it arrived a few minutes later.

The Oyster Soup is drizzled with a tiny bit of sesame seed oil, there are shredded pickled cabbage and ginger slices inside, the oysters are in no doubt of freshness, they all have a sturdy and gleaming outlook, the taste to some extent resembles that of the French Gillardeau (relative of the Tainan oyster) but only at a fraction of the price.