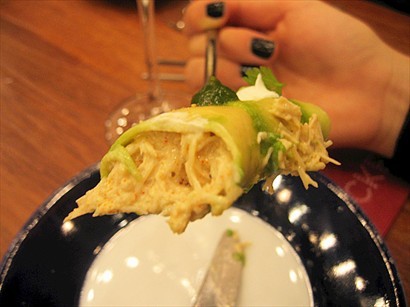 When talking about my favourite tapa of the night, it has got to be the Avocado Cannelloni filled with Crab Meat. The avocado slices were so soft and it was filled with tremendous amount of crab meat that simply flooded out when I bited into it. GOD That was SO GOOOOOOD!

The marinated fried fish was no bad too. It was marinated in Indian style with spices. It was flavoursome, crispy outside but far from greasy. The only thing was I found the flavour of the spices slightly overwhelming that you could hardly taste the sweetness of the fish itself.

Jamon Canario a la Gallega was prepared the same way as the famous Pulpo a la Gallega from Galicia. The potato was soft and mushy. It was not too surprising though as for me it is just potato and ham. I guess it is something very traditional for the Spanish.

The Mollete with Double Chin was simple yet very tasty. It was made with a light little bun filled wth grilled belly pork slice. The pork itself was scumpious and juicy which really made this little sandwich so delicious but free from any complexity.

For desserts, we had Passion Fruit Marshmallow and Black Sesame White Chocolate. I must say for both the sweets, the presentation was way more exciting than the taste itself. The Marshmallow worms were fluffy and light, while the chocolate was smooth but melted easily on the hands.

In short, it was a fascinating experience dining in Tickets (it's not too filling though so like Kevin said don't go there starving.) The food quality was excellent. Worth trying!