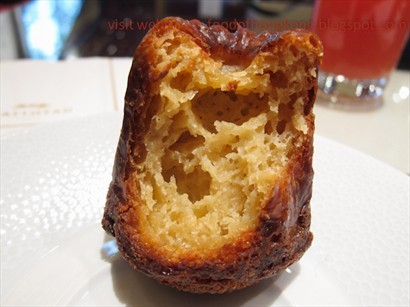 Salted Caramel & Cognac Champagne Remy Martin
Dalloyau is one of the most oldest and traditional style French food shops dating back to 1682,  but seems to have dropped off the radar or lost its lustre during recent years.  They’re not making much noise lately.  Yet, they continue to garner a big following in it’s Japan outlets but I was more keen to revisit the Paris stores instead – once again I chose the bigger one of their shops in Bastille which carried the best range.    This store runs as both as deli as well as a Tea Salon,  which definitely suited my purpose.   There are to be No Photos allowed,  but somehow I took a lot of them before I got told off again,  just like my experience at Pierre Herme.


- Dalloyau Opera Cake -
This is their famous Dalloyau Opera Cake,  which everyone else in the world copied from!  Although not my 1st time trying it,  it’s always good to revisit it a few years down the track.   Invented as the Opera cake in 1955 by Cyriaque Gavillon from Dalloyau,  this cake borrowed ideas from similar sliced cakes and created to show visible layers of various ingredients, to be eaten in a single bite to release the various layers in taste.   Joconde biscuit is soaked in coffee liqueur,  then layered with coffee buttercream and then there are 2 layers of chocolate ganache in between.

- Canele -
Trying a traditional Canele de Bordeaux here makes sense.  The exterior crust on this was spot on, slightly caramelised but not hard crispy.  The inside was slightly hollow in the middle,  but at least not wet like the one in Laduree Paris.   This didn’t have as much rum and vanilla taste though but was still detectable,  but had a good egginess instead.   It’s not perfect – but it is better than most that I could grab on a regular basis!   ~   8/10

- Salted Caramel & Cognac Champagne Remy Martin Macarons
I liked the Cognac Champagne version more,  with just a hint of Cognac spiking the macaron sandwich.   It was decent.  You can find prettier macarons out there,  but this passed the taste test.  The Salted Macaron one was also good but a little too sticky and chewy. ~  7/10
評分: 味道4   服務3   環境4   衛生4   抵食4
檢舉此評論
回到頁首